A selection of photos from the meeting and related activities. 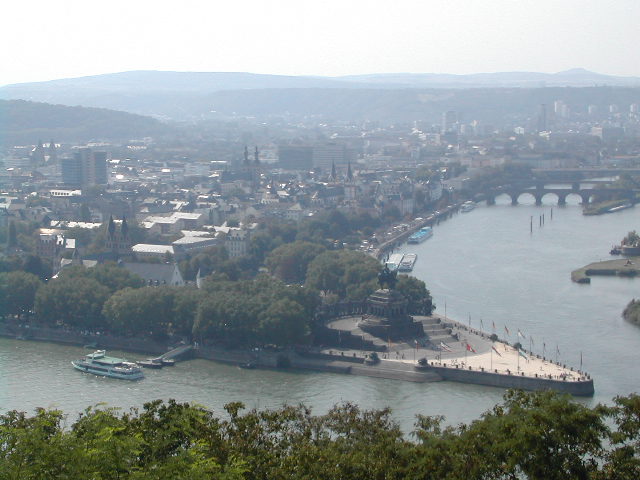 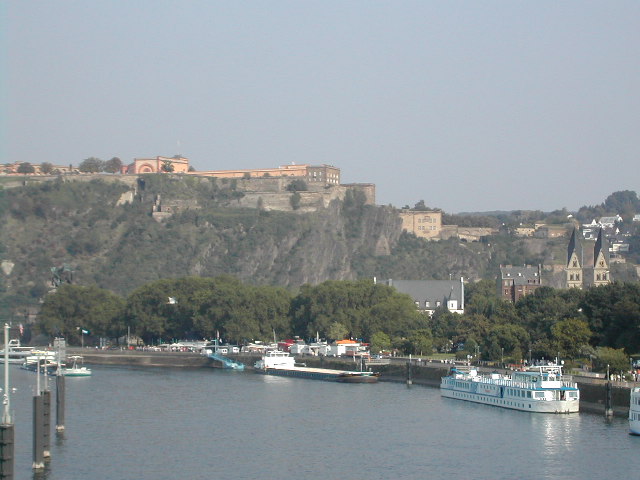 Left: View of the town of Koblenz with the Deutsches Eck (German Corner) landmark protruding into the junction of the Rhine (foreground) and Mosel rivers (right).  It was very warm, so there was some haze in the air.  This view was taken from the Ehrenbreitstein Fortress (photo on right) overlooking Koblenz.  One of the activities arranged was a tour of the fortress where a charismatic actor enacted various scenes from history in period costumes, using old wine crates for props. 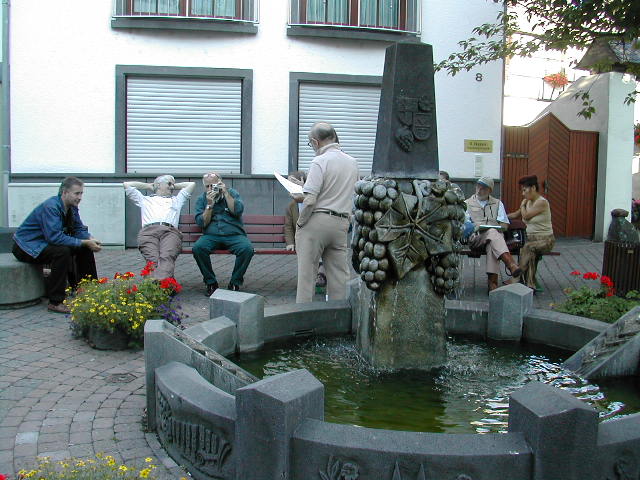 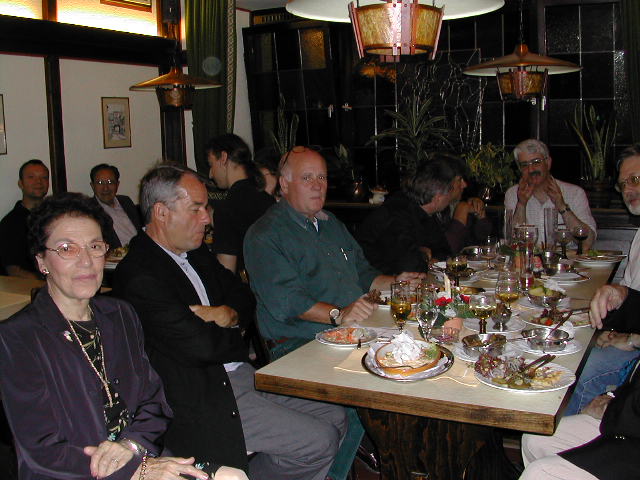 The Grebel Hotel and Wine Tavern in Güls, across the Mosel from downtown Koblenz, was the primary hotel for the meeting.  According to reports, guests were serenaded at night by the resident hotel dog.  The photo on the left shows the picturesque courtyard of the hotel.  Among the guests seen relaxing next to the old fountain are famed Zeiss numerologist Thomas Antoniades and fellow conspirator Jack Kelly.  Several fine dinners were enjoyed at the Grebel (right photo), though ordering was often an adventure if your command of the German language was not so good.  On the left is the lovely Irene Grossman with husband Nicholas hiding in the background (all the better to indulge freely in the food and wine). 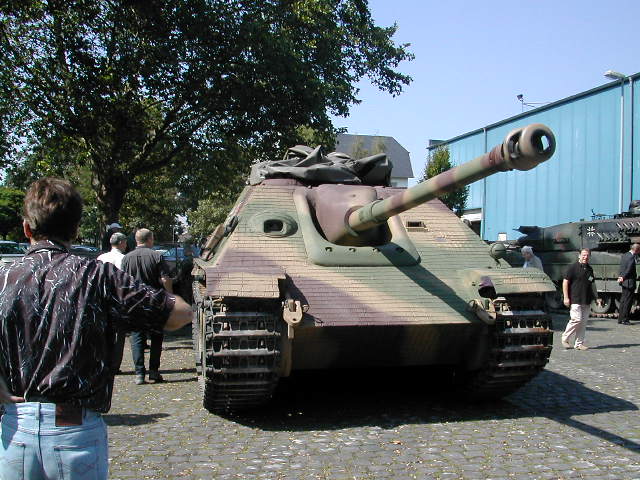 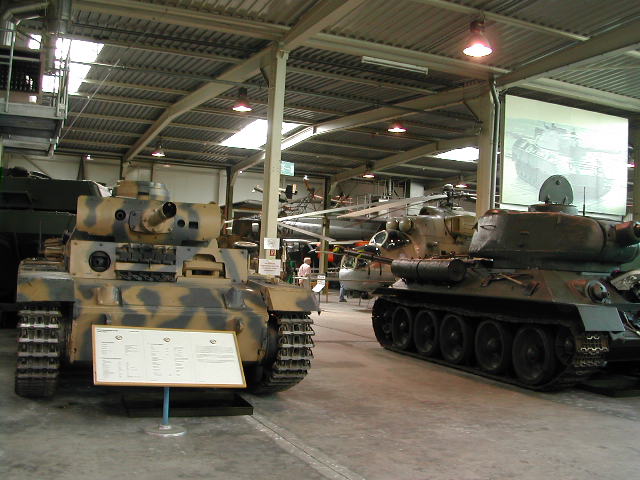 The WTS (Wehrtechnischen Studiensammlung) military museum in Koblenz hosted the meeting.  Several tanks, some running (and loudly interrupting the meeting), were among the many pieces on display from the WTS' impressive collection.  The WTS also has displays of many binoculars and other optical equipment but I unfortunately I did not get pictures of them. 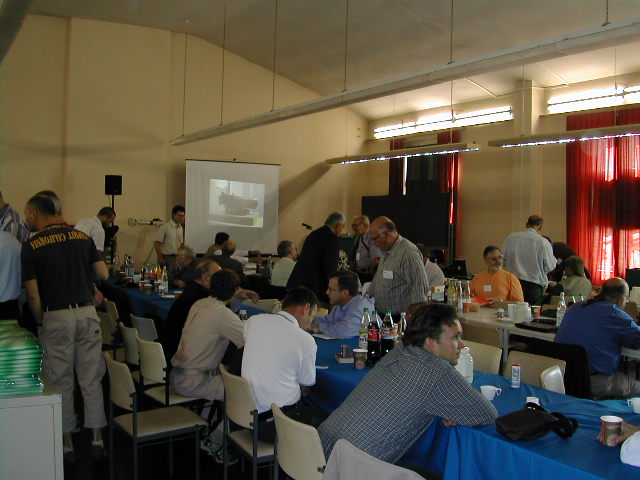 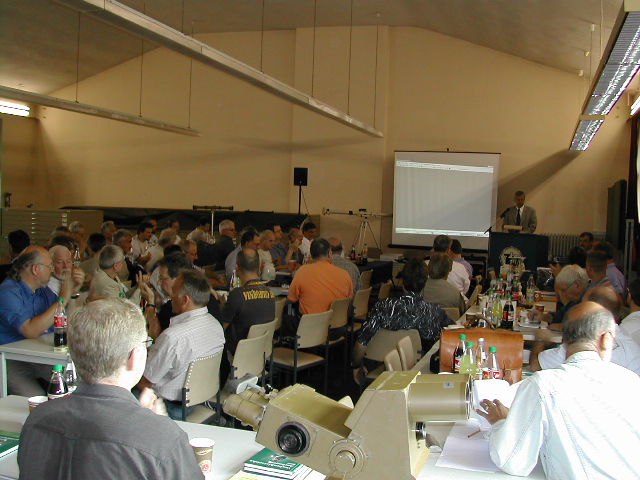 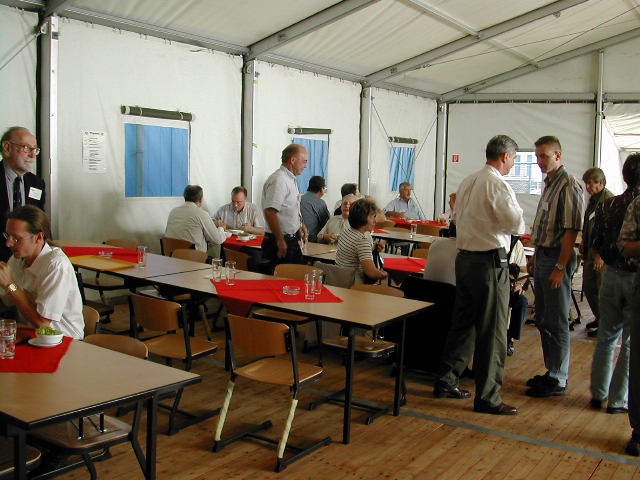 The first two photos above show the meeting room at the WTS.  Over 70 people from around the world attended.  Hearty canteen style lunches were provided in barracks at the WTS (right photo).  For some of the attendees this brought back memories of military service. [1 extra photo 2017 by U. Zeun] 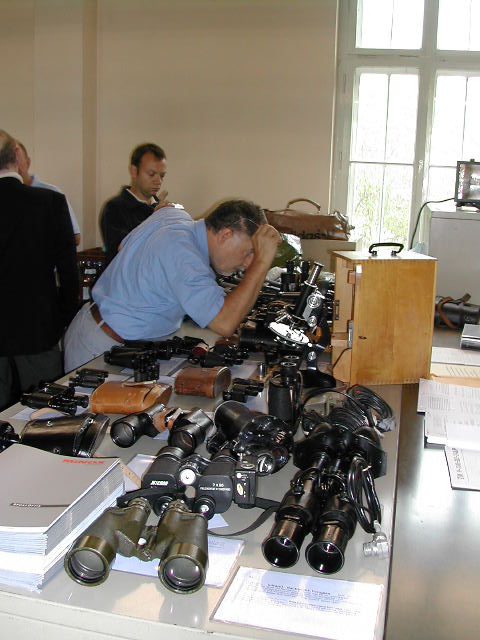 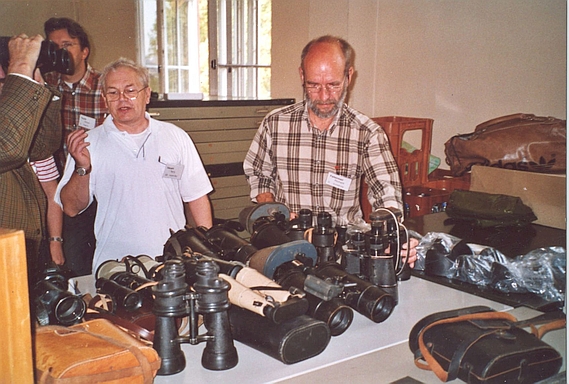 Some of the displays and auction items in the meeting room are shown above.  Many treasures changed hands. [2 extra photos 2017; 1: Fan Tao + last: U. Zeun] 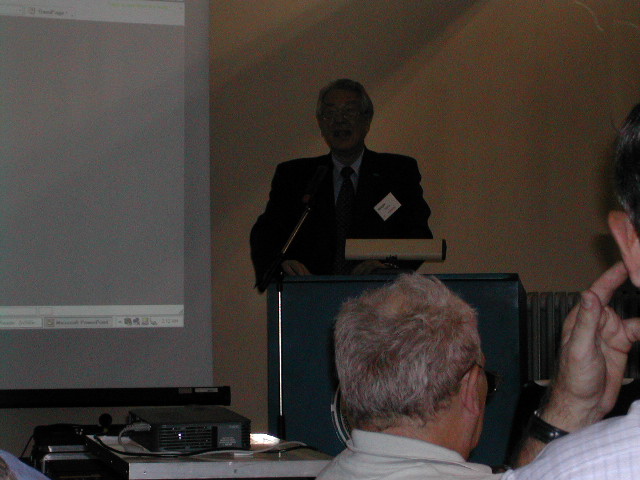 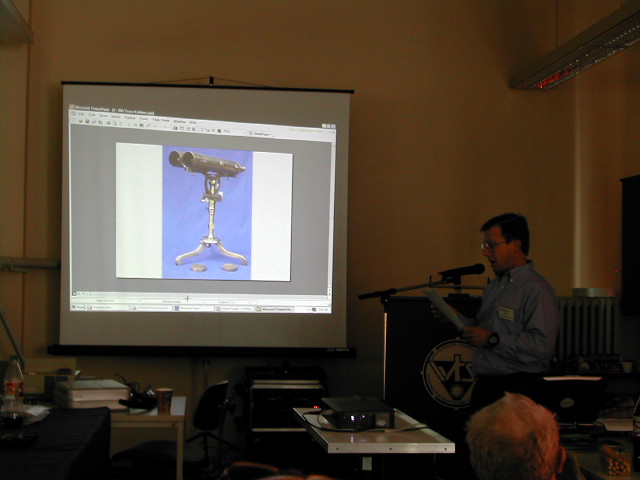 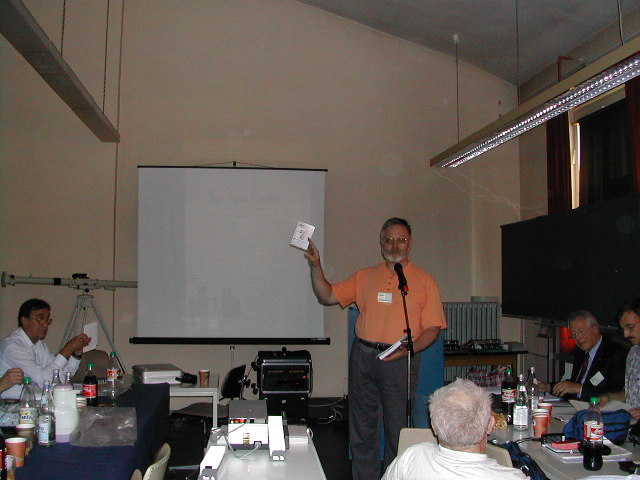 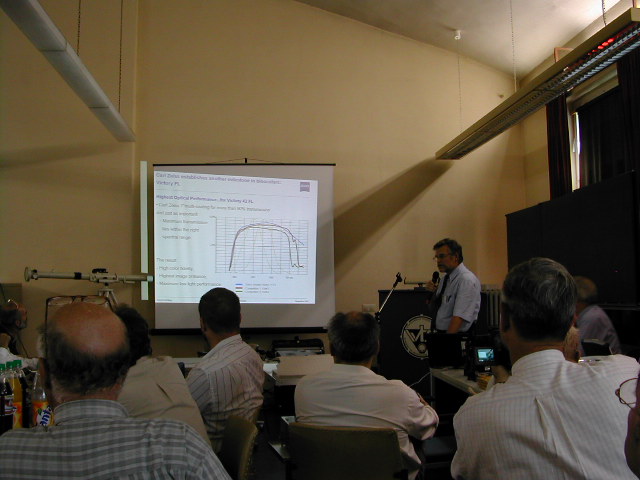 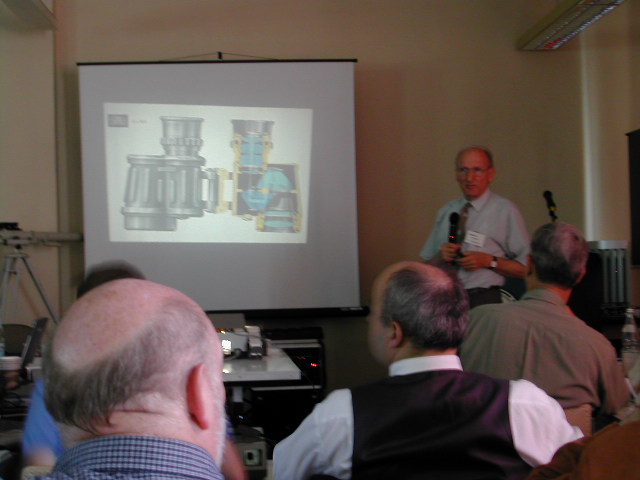 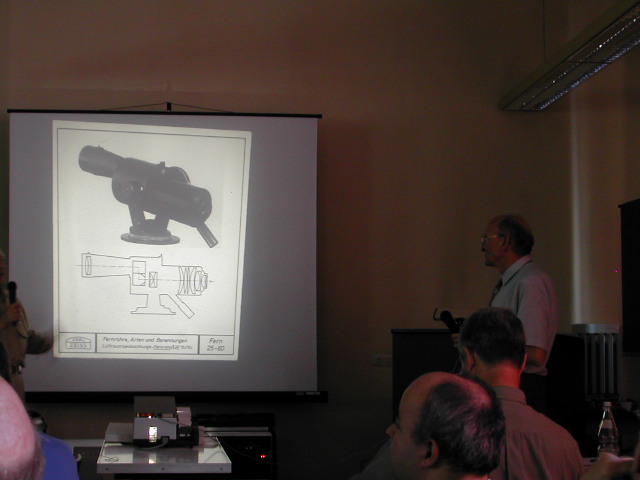 Just a few of the many presentations from the meeting (above, left to right):

1. Hans Seeger gave an introductory speech.  Hans, Lothar Esch, and Lothar Simon of the WTS were the primary organizers of the meeting and deserve many thanks.

2. Peter Abrahams with his talk "The First 300 Years of Binocular Telescopes".  Peter is the moderator of the e-mail list from which the Binocular History Society sprang.

3. Larry Gubas of the Zeiss Historical Society showed us some early Zeiss publications.  Larry has just written a book on the history of Zeiss binoculars.

4. A representative from Zeiss (I believe his name is Kurt Becker) talked about their newest binoculars.  The graph shows the light throughput of the Zeiss Victory FL.  Representatives from Fujinon, Leica, Minox, and Swarovksi also attended.  One of the topics on the agenda was a spirited discussion with the industry representatives on what is missing and should be available in today's binoculars.

5. Roland Leinhos (former Zeiss designer) gave a talk on military models from Zeiss Oberkochen.  The slide shows a diagram of what appears to be an 8x30.
[one photo included 2017 showing the Zeiss Oberkochen LBF 15x75 (LBF = air observation telescope)}

Contrary to one might think from the above samples, there were talks given on topics other than Zeiss.  For example, Simon Tomlinson talked about British binoculars and Hans Weigum talked about binoculars found during his travels in Russia. 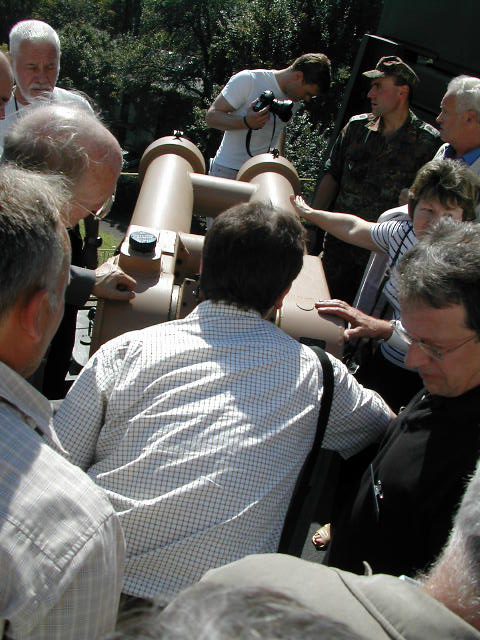 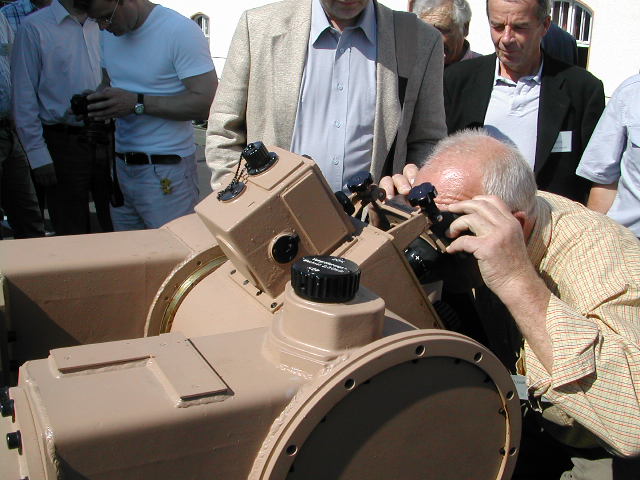 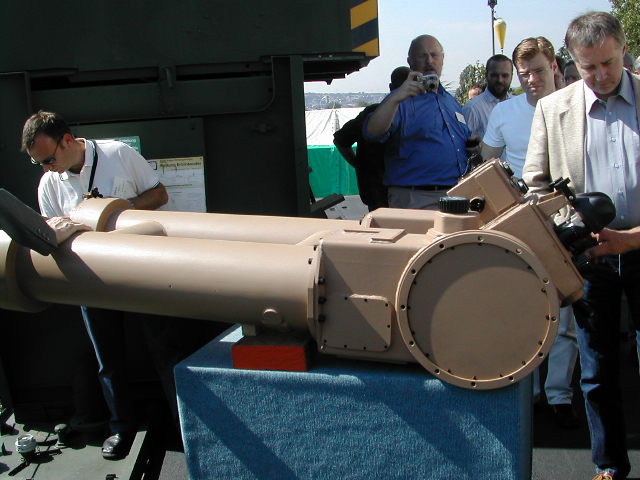 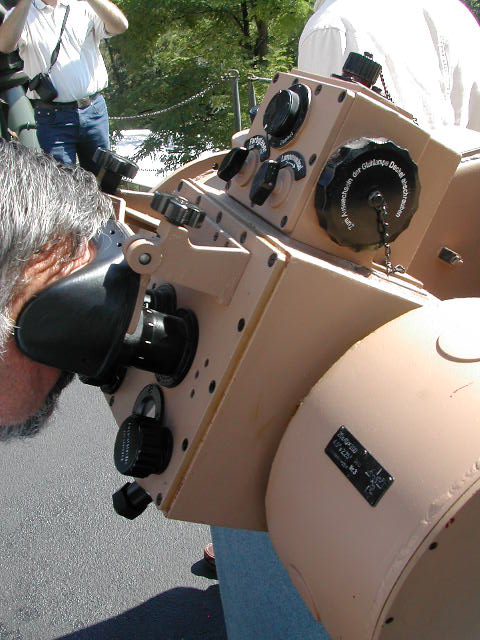 The WTS brought out the enormous 200mm binocular, built by Zeiss during the Second World War, for the crowd of attendees to admire.  It was worth the wait to get a rare chance to look through such an amazing instrument. The restoration was done by Kevin Kuhne of the United States.
[2 extra photos included 2017] 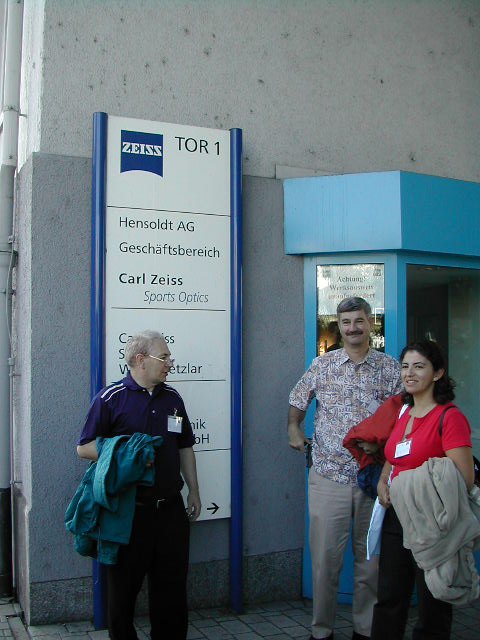 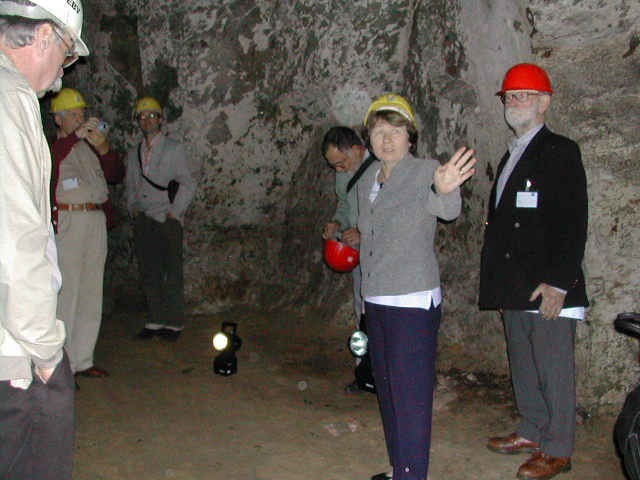 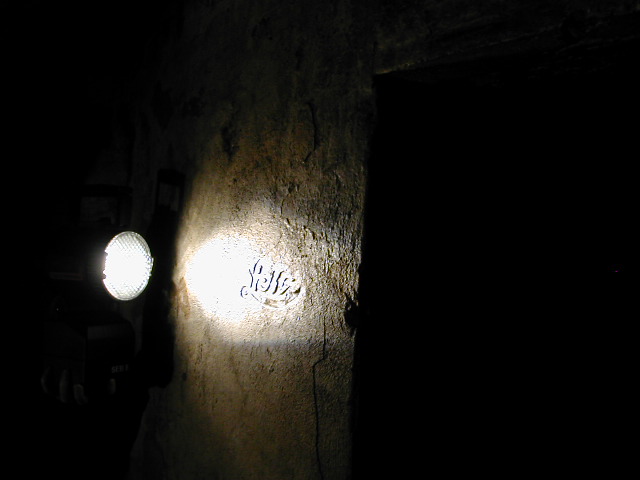 On Monday a group of us travelled to Wetzlar for two tours.  First Zeiss generously hosted us for a tour of their of Hensoldt Group plant where they manufacture sport optics (including binoculars).  In the photo in front of the Zeiss plant are Terry Vacani, Stephen Rohan and wife Ivone.  We saw some very high tech machinery for generating lenses and machining bodies.  For obvious reasons I refrained from taking photos inside their facilities, except for one instance when we were given permission to photograph a worker hand finishing prisms (second photo above).  Zeiss employees patiently answered our many questions and even served us another of those German canteen lunches which were becoming familiar by now (lots of  potatoes).  Afterwards Karsten Porezag took us on a tour of the nearby tunnels which were built during World War Two to serve as air raid shelters and underground factories for Leitz and other firms.  Karsten (author of several books, including one on the history of Hensoldt)  is on the very left of the third photo, with Anna Vacani and the distinguished William Reid (author of the Barr & Stroud binocular book "We're Certainly Not Afraid of Zeiss") on the right.  In the photo on the right, one can see the Leitz logo carved on a tunnel wall.

Note: The Binocular History Society is currently [this report was made Sept. 2009 !!] an informal world wide organization without regular dues or publications.  We meet at least once a year in the United States and locations around the world.  Anyone with an interest in the history of binoculars can join.  For now, please see Peter Abrahams' web site on the links page for more information.